Too hot, too cold – you can’t please everyone when it comes to the perfect office temperature. A 2015 survey of 129 office workers in the US found that 42 per cent of people think their building is too warm, while 56 per cent think it’s too cold. And it’s a significant disagreement because temperature affects productivity – if you’re swearing at your desk, you’ll have trouble applying yourself to your tasks at work, and the same applies if you’re bundled up in jackets. So, what is the optimum working temperature?

Government website Gov.uk says that there’s no law for minimum or maximum working temperatures, other than a suggested minimum of 16°C or 13°C if employees are doing physical work. There are, however, stipulations that during working hours the temperature in all indoor workplaces must be reasonable and that according to health and safety at work law, employers must keep the temperature at a comfortable level, and provide clean and fresh air. Helpful but also vague.

To give a more pointed answer out to the conundrum that is office temperature, researchers at the Lawrence Berkeley National Laboratory collected productivity readings and temperature recordings from 24 different studies and found that the perfect temperature should be between 20°C and 25°C. This might seem a tad too warm but another study that looked at the thermal effects on office productivity by measuring the activity of clerks in an insurance office, found that at 25°C the clerks were typing non-stop with an error rate of just 10 per cent. When the temperature dropped five degrees, they were half as productive, more than doubling the number of mistakes.

It seems that, as per research (and there is so much more of it than the couple of studies mentioned here), 21°C-25°C is a sensible temperature range to aim for in the workplace. Along with that, employees should be encouraged to dress appropriately (on an effort to moderate their temperature) and to verbalise their concerns if they feel that the office temperature is affecting their concentration and productivity.

Contact the CH Systems team on 0208 302 8149 or info@chsystems.co.uk if you have any energy queries relating to your home or business.

Sources: bbc.com – “The never-ending battle over the best office temperature”; “How temperature affects productivity in the workplace”

One of the most challenging projects the CH team has worked on was an assist on a block of apartments directly above a parade of shops, with the plant room above the stair well.

The district heating scheme providing low temperature hot water (LTHW) to he heat interface units in each flat is served by a Valliant Buffer, which is in turn served by a pair of Vaillant boilers. The primary pipework required modification from the boilers to the buffer vessel as there was not sufficient flow. The secondary pipework also required modifications to ensure we got the required flow rates. Tough stuff.

Our team managed to complete all the work in one day and with little disruption. 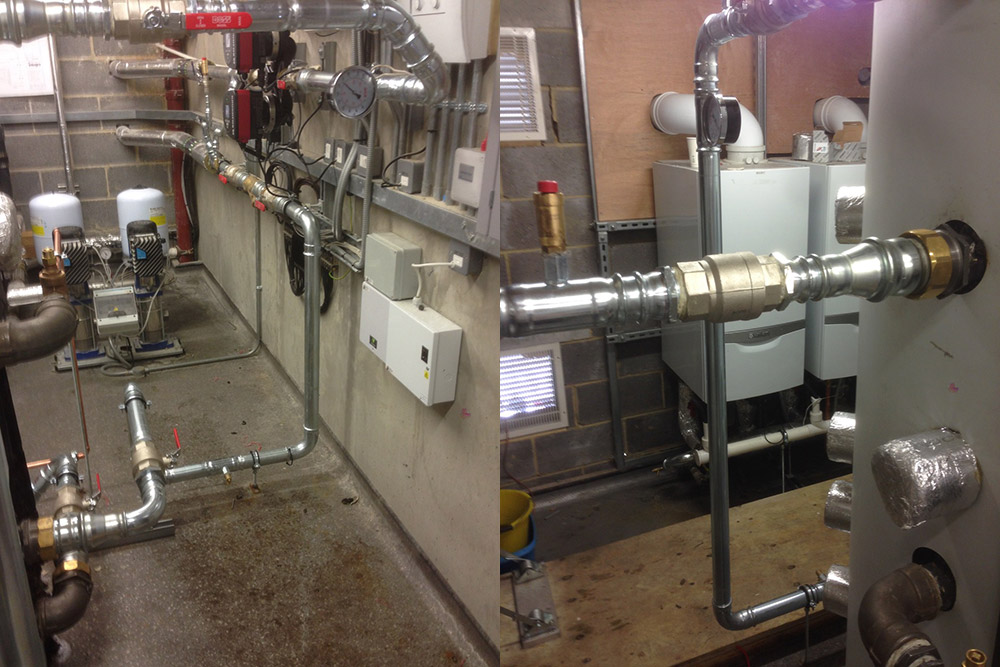 Our team managed to complete all the works with only one day of down time to the tenants and with little disruption. 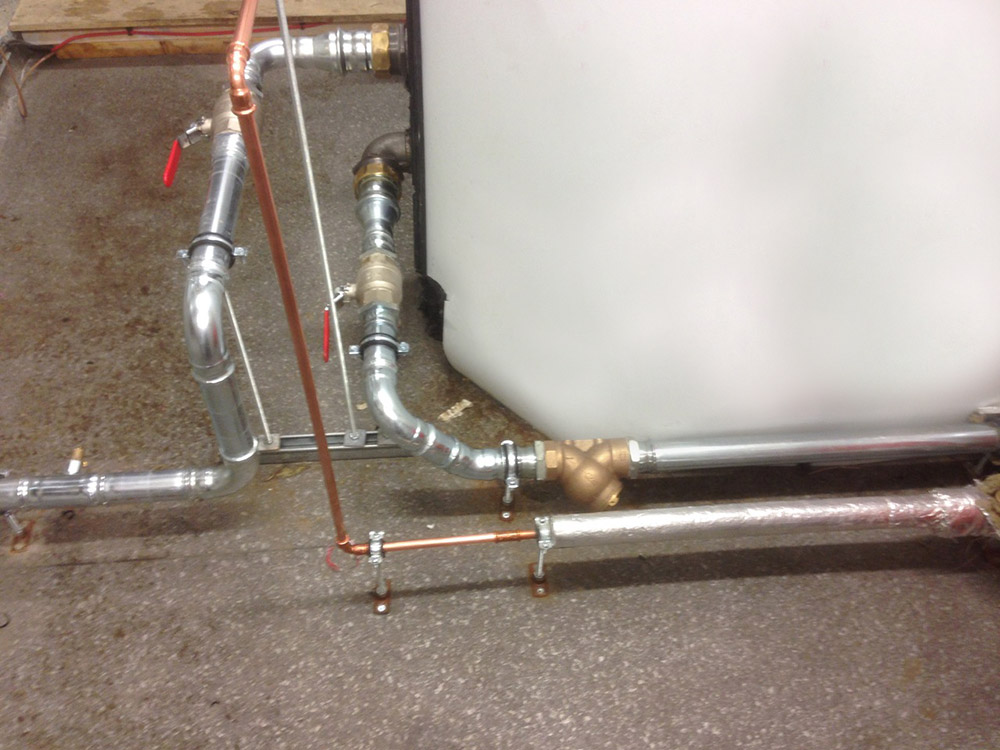 This Plant Room upgrade in Midsomer Norton required the removal of an old floor standing shell and tube boiler, which was fitted with a still-functional Nu-Way burner. We also removed a gas fired Andrews water heater and Stockvis Domestic hot water plate exchanger.

As you can see from the pictures below, it is extremely important to inspect flues during services as the inner wall of the flue had completely collapsed and was blocking the flue way.

These appliances served a Leisure Centre so we had to maintain services for the duration of the project. We fitted 4no Remeha boilers complete with frames, a low loss header and mixing pot, which then goes out to feed the system. The low temperature hot water system (LTHW) was installed in Geberit Low carbon steel Mapress and the gas was fitted in Stainless Steel. We also had to pipe up the new air handling unit which was replaced as the previous model had no heat recovery option.

Overall, this project was completed punctually with minimal ‘down time’ to the centre, which will soon see the benefits of a more energy efficient system. 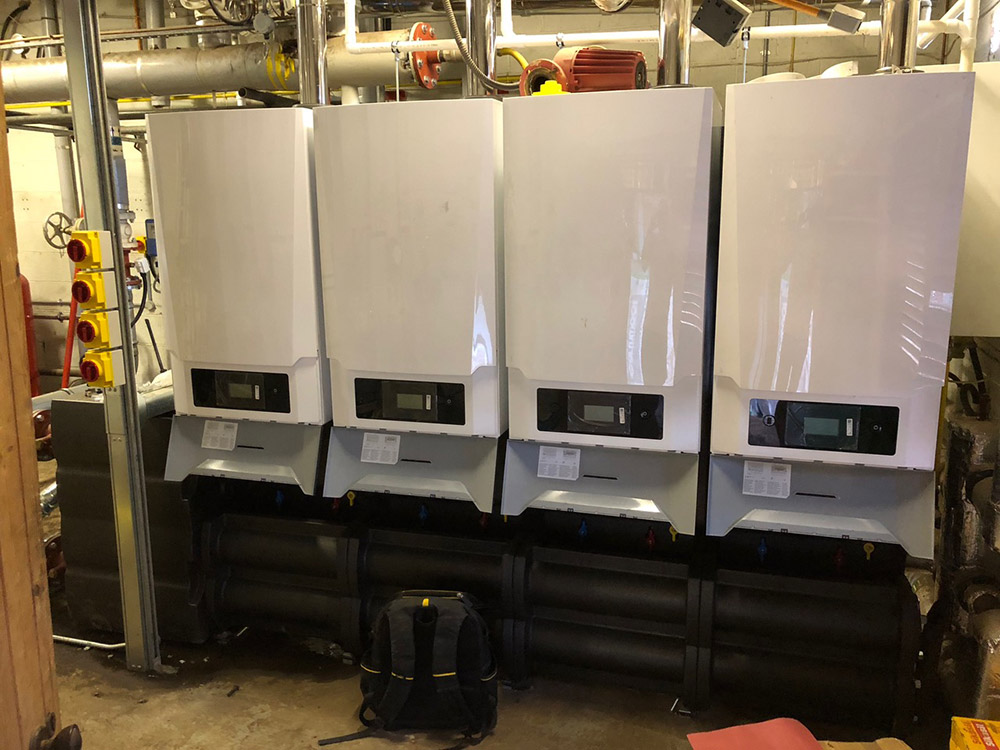 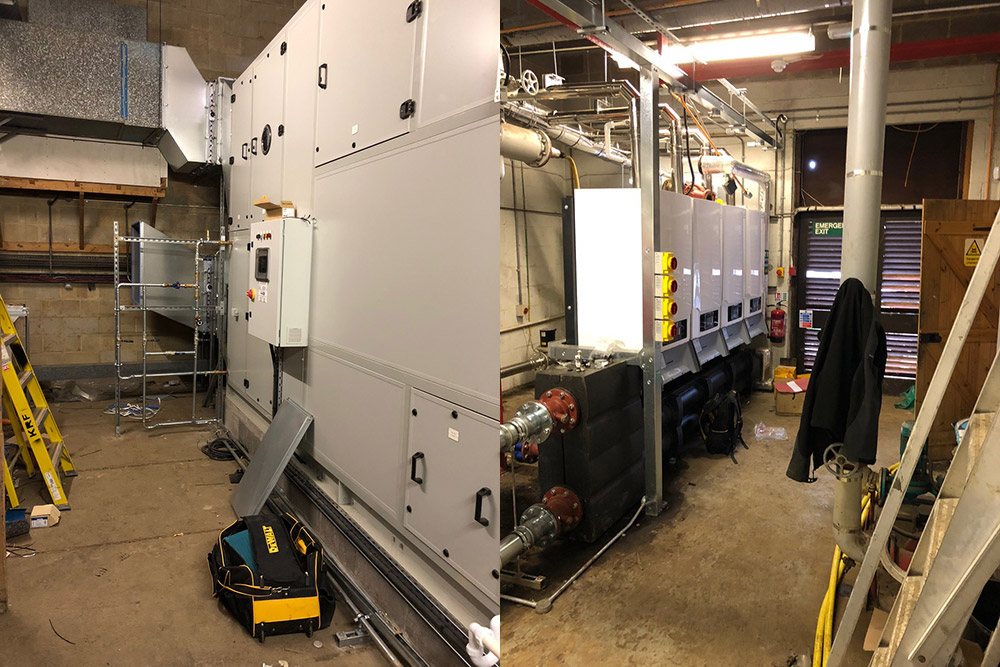 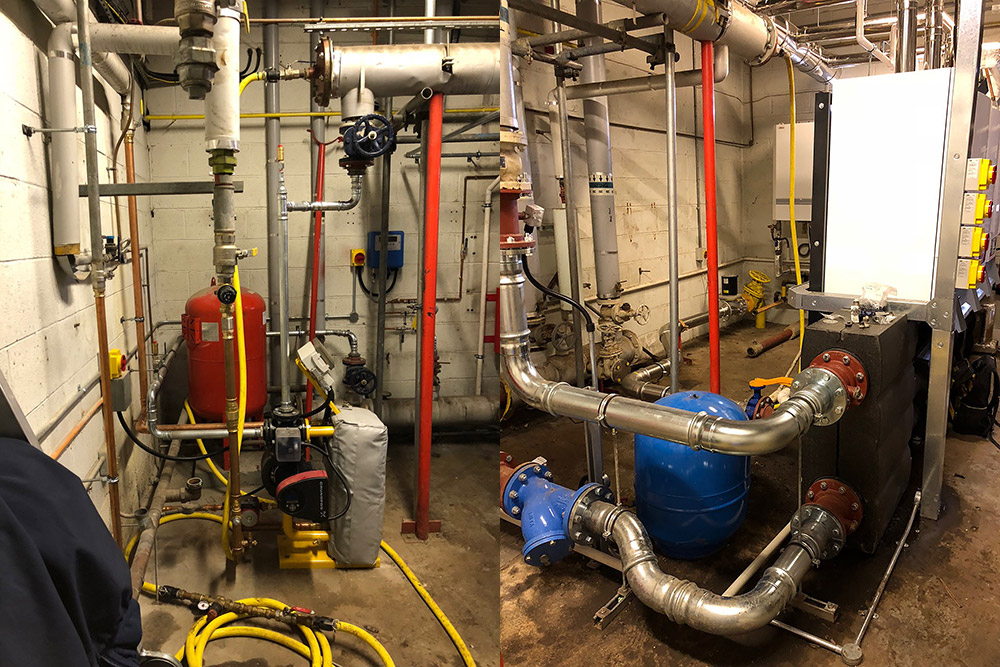 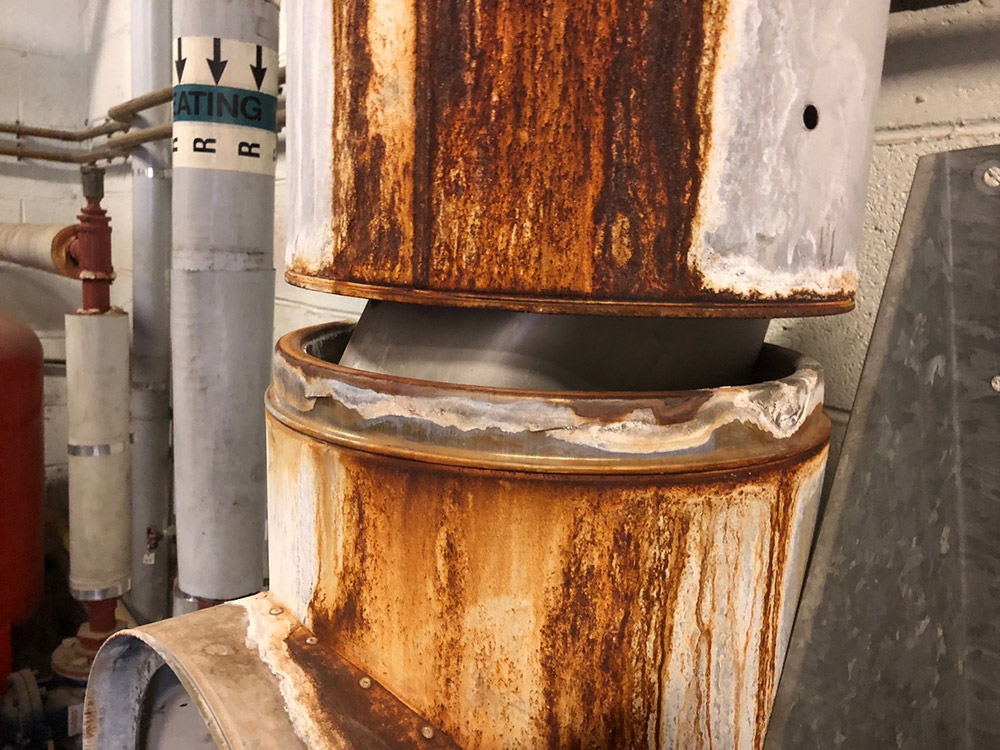 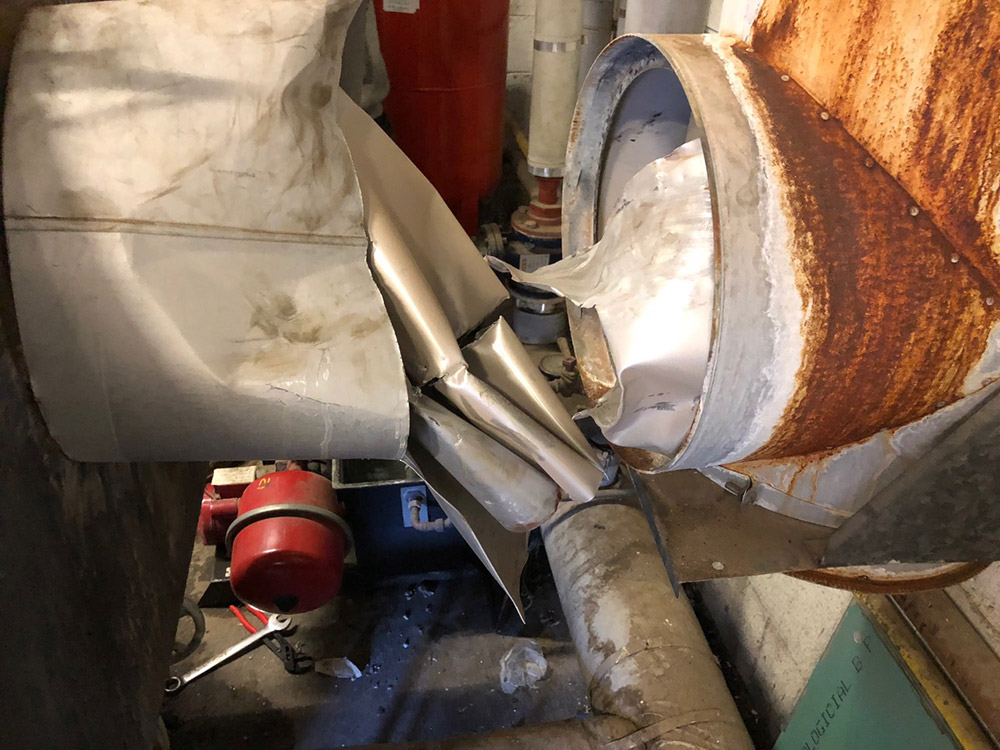 The CH team was briefed to fit two new Hamworthy Wessex ModuMax mk3 boilers (alongside the existing Hamworthy boilers) in a recent Plant Room upgrade for a national supermarket Chain in Walthamstow.

Our welders had to fabricate a number of spool pieces to enable us to connect to the Imperial Table D flanges. We also had to fabricate a 6-inch header to which all 4 boilers then connected on to. The gas run on this installation was all carried out in 108mm Geberit Mapress Stainless and was slightly challenging as we had to run this on the underside of the first floor slab; the work was all carried out on a SkyJack SJ19, which greatly helped in reducing the installation time.

The heating coil that serves the shop floor air handling unit was also changed over during the course of the project and we’re happy with the final result. 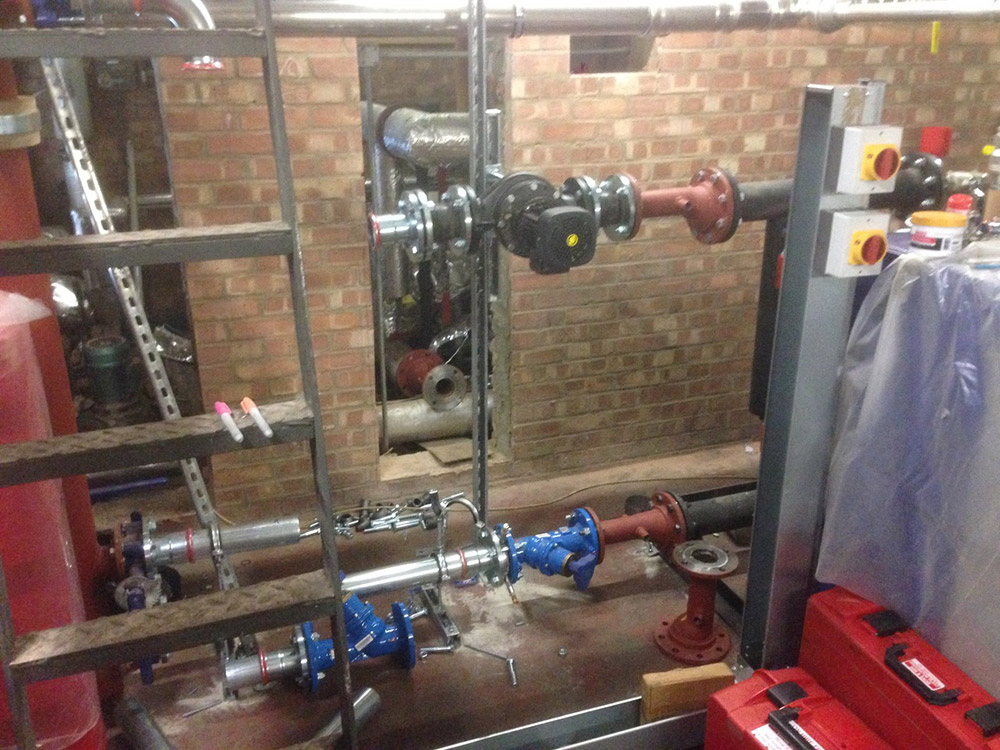 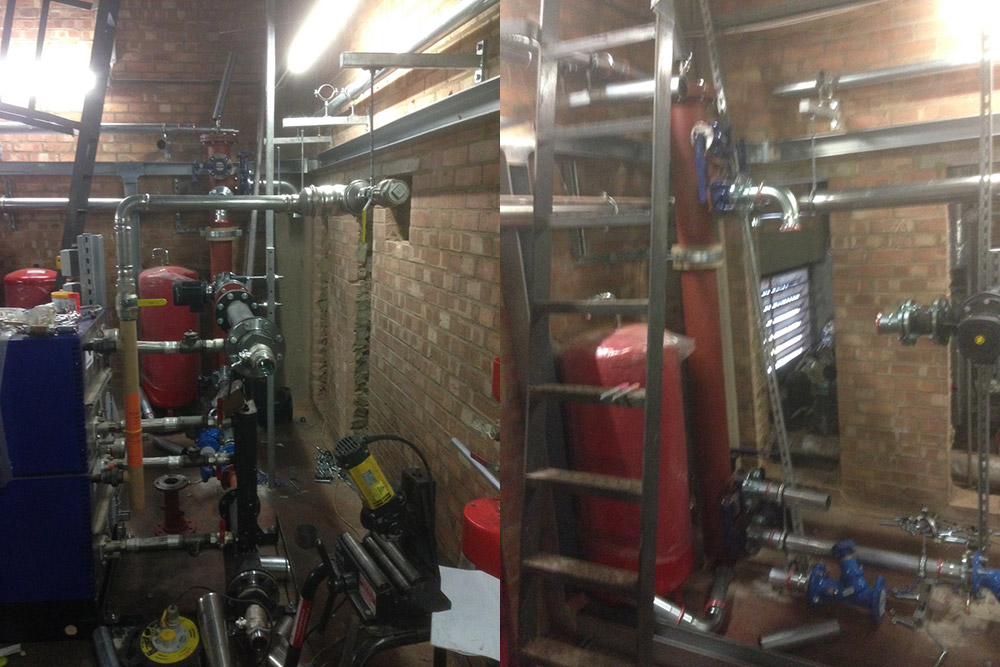